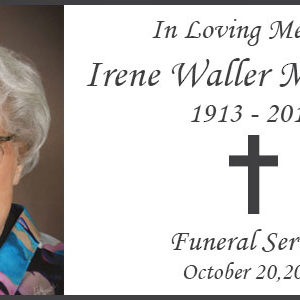 Irene had a long, happy, industrious, and fruitful life.  She gave of herself and her resources to help others.

This is a short overview of Irene’s life.  Outliving everyone who knew her as a child and a young woman, she wanted to tell her story to you who knew her in her later years, giving God the glory for a life well lived.

Irene was born to Fred and Annie Caudle Flowe on November 30, 1913, on a farm near Mt. Vernon, Texas.  She made her decision for Christ at an early age and was actively involved in Kingdom work for the remainder of her life.

After grade school in a rural area, and before school buses, Irene rode her horse the five miles to town for her first year of high school.

Irene’s first job was at the Court House in Mt. Vernon, Texas in the County Clerk’s Office.  She bought a farm with her earnings instead of buying a car, beginning her life of investing.

Irene was actively involved in several outstanding historical events during her long life, the first being when the big East Texas oil field was discovered.

Prominent oil men from Dallas converged on the Mt. Vernon courthouse to have their oil and gas deeds recorded. Irene went from a one girl office to supervising 12 recorder typists.  They worked almost every waking hour, seven days a week.

She then moved across the hall to work for the county school superintendent/county judge. Working with rural school teachers, she issued and collected textbooks for each school year reporting to Austin the accounting of the books. She paid the bus drivers for the rural high schools and she always volunteered her time helping farmers or other folks with paperwork.

In November 1939, Irene and her first husband Hollie Cowser were married. Shortly thereafter World War II began and along with it came rationing of shoes, silk hose, soap, milk, sugar, tires, gasoline and so much more.

Due to the need to build new Army training camps and because of his mechanical training and experience, Hollie was drafted and assigned to Essential War Work.

Irene joined him and together they worked to fulfill mechanical contracts for army training camps scattered across Texas and into Oklahoma.  Working ten to twelve hours a day, seven days a week was required to get these essential camps ready for the trainees.

Hollie was then sent to a shipyard in Brownsville, Texas to supervise the completion of 100 ft long rescue ships.

It was then that Irene was involved in a second outstanding historical event.

She was honored to be asked to christen one of the ships.  Photos were taken and certified papers signed as required, and sent to the archives in Washington D.C. recording the event.

In 1945, the war was over, Irene and Hollie returned to Dallas and could then get involved in church again. They were actively involved at Ross Avenue Baptist Church. Irene became superintendent of the large young people’s Sunday school department; she also had the YWA girls and was in charge of weekly visitation for the entire church.

They started the Cowser Plumbing and Heating Company. In the post-war era, there was a big shortage of everything, particularly building materials. The country was in need of new construction and in the ensuing years the Cowser Plumbing and heating Company had the mechanical contracts for newly constructed schools, hospital additions, two Texas State fairground buildings and more.

In 1955, one of their last big contracts was at Love Field airport in Dallas, with American Airlines.  An enormous hanger had to be built to accommodate their new jet passenger airplanes. Cowser Plumbing and Heating won the contract for the mechanical work.  This major project took over a year to complete and shortly before it was finished, Hollie died suddenly of a heart attack. Irene, being deeply involved in the business, saw the job through to completion.

In 1958, after approval of the final inspection and acceptance of the building, the city of Dallas, the mayor, city officials and a host of people on the ground held a ribbon-cutting ceremony for the new hanger.

This is when Irene participated in a third outstanding historical event.

The American Airlines officials invited her, as the only woman, to ride on the maiden flight of their first jet passenger plane.  When Irene disembarked the plane, a large crowd had gathered and there were television cameras recording the celebration. Missing the festivities and recognitions, Irene, instead, chose to rush to church for the wedding of one of her YWA girls. She didn’t seem to realize the significance of this honor as her main focus for life was the church and church-related events.

Irene sold the business in Dallas and took a temporary job which required her to travel throughout the Midwest.

In 1961 after 48 years in Texas Irene moved to Des Moines, Iowa.  She searched for a Southern Baptist church and finally found the only one in Des Moines – Crestwood Baptist church where we are today.

She actively contributed to the work of this church, bringing her experience from Dallas.  She was secretary of the Sunday School, led the visitation program and served on the finance committee, as well as filling many other needs.

While Irene was serving on the missions committee she was involved with two new church starts out of Crestwood, Trinity Baptist church in South Des Moines and Ashworth Rd Baptist Church in West Des Moines.

Irene utilized Bob’s knowledge and influence to help find affordable land and buildings for churches, working with the cities when necessary, and locating and leasing space in Des Moines for the first state Southern Baptist headquarters.

The following is a list of Irene’s responsibilities as reported by the Baptist Convention of Iowa Historian, at the 50th-anniversary celebration of Baptist work in Iowa.

Never salaried in the state of Iowa, Irene originated and administered the church loan fund loaning money to small Southern Baptist churches around Iowa. She researched how this should be done and located knowledgeable advisors from Dallas and Ohio to help set up the fund, loaning money to small churches around the state. Eventually, all the loans were paid in full and the need no longer existed.

Seeing the existence of foundations in other state conventions, Claude McFerron saw the need to start a foundation here in Iowa. He gave the seed money and Irene Waller added to this and together they created the Iowa Southern Baptist Foundation. Irene spent a lot of time working to organize and set up the foundation. A committee was formed to help review and approve requests for scholarships and grants across Iowa.   For several years Irene served as the chairwoman, investing the money received from donors.

At the state convention each year Irene gave the Foundation’s report requesting donors to contribute to the fund and informing churches about the availability of grants.  After Irene served as chairwoman for several years the state director assumed responsibility for the foundation which is still in existence today.

Irene was working on all of these activities during the 1960’s and ‘70’s as Southern Baptists in Iowa formed first 1 then 2 associations, then 2 became 4, then to a state fellowship of churches that eventually became the state convention of today.

Irene was truly a pioneer in development and growth for Southern Baptist work in the state of Iowa.

In 1981 Irene became the wife of a well-known Southern Baptist minister, Reverend Claude McFerron, known as Pastor Mac. They began their life together at Immanuel Baptist Church in Waterloo.

Then God called them to Calvary Baptist Church in Indianola.  In a year’s time, they went from meeting in rented school rooms and auditoriums to building a new church building.

Four years later they were called to Calvary Baptist Church in Marshalltown where a much-needed fellowship hall was added and the parking lot was paved.

Wherever they served Irene was a full-time volunteer fundraiser and church secretary.

During her years in Iowa, Irene was also a member of

Due to Irene’s generous donations and extensive volunteer work, she has received numerous recognitions.

Conference rooms, fellowship halls, and classrooms in churches, at Hannibal La-Grange University and at Central Iowa Shelter and Services homeless shelter all bear her name. Irene’s name can be found from Texas to Missouri to Iowa honoring her for her generosity.

Irene was 104 when she left this earth. She almost made it to 105. Irene’s story reads like a history book because she lived through and was active in a lot of our history.

She was born before World War I in the era of silent movies. She rode a horse to school and then saw the world move from the mass production of the first automobiles to rocket ships to the first man on the moon and even tourists flying into space.

The world has changed a lot during Irene’s Life. A gallon of milk has gone from 35 cents to over $3. Women’s skirt lengths have gone up and down and back up again.

Irene learned shorthand and typing at business school, using a manual typewriter even until today. She did calculations in her head or with pencil and paper, or maybe an adding machine unlike today when everyone has a calculator app on their phone!

In the last century, the world developed with amazing speed and she was active in it.

God used Irene to touch innumerable lives and to further His kingdom.